When I said, “I’m going to Germany”, most people thought that Berlin would be my top destination. In fact, it was the last city that I visited during my Germany trip—even for less than a day. I know, sometimes I guess I’m just that weird.

I arrived in Berlin at around 4pm, and planned to buy a ticket back to Sweden on that day at 10pm. Some people might think—omg, it’s Berlin, how come you just stay for 6hrs?
Uh, honestly… I’m not sure how to answer that, hahaha.
Long story short, I need to leave the next morning at 11am because no seats available for the 10pm one.

But anyway. Within that short period of time, I really became a 99% tourist.

First thing first, let me tell you about the weather in Berlin. Yep, the rain was pouring down as if I was not welcomed there.
Still, it didn’t stop me from strolling around the city—uh, I have no choice actually.

The Holocaust Memorial: Twenty-Five Shades of Grey
When my not-so-local friend William and I walked along the street, we didn’t reliaze that the Memorial was just beside us. All I could see was a lot of blocks with different size.
Since it was raining hard, I felt really cold. Plus the sky was super gloomy. So… you know, it kinda gave me goosebumps, knowing that this place was named Memorial of the Murdered Jews.

And then we decided to explore this place. ((EXPLORE))
Err, basically it was all the same view, but still! I felt like I was in the Maze Runner movie.
See, see. How cool is this place! Imagine you’re there and literally trying to escape from the maze. 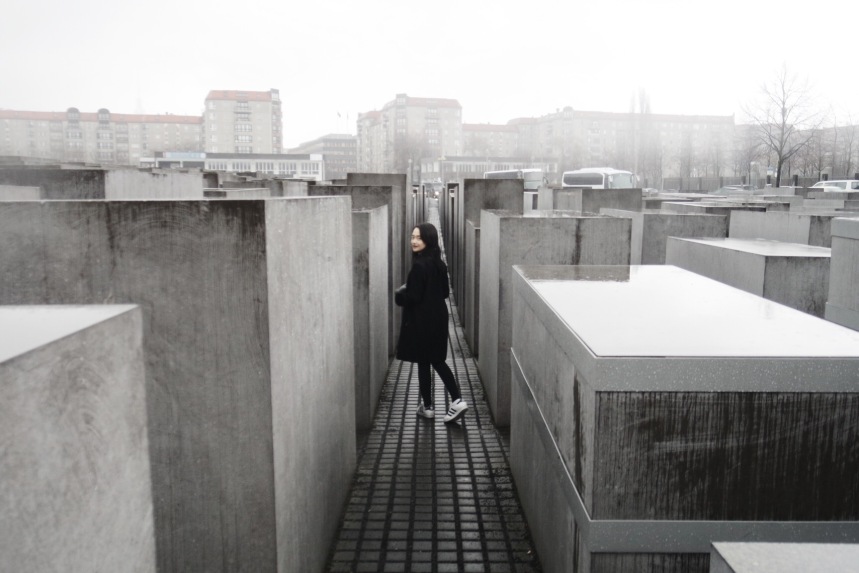 Of course, I didn’t let go of the chance to climb up the block. I put a lot of effort to stand there, by the way. Then I told my friend to stand on another block (which he did it so effortlessly) to take this picture.
Oh, and in case you wanna know, I could get down by myself safely.

The Mainstream Brandenburg Gate.
Walk several steps from The Holocaust, now we’re here at the #1 place-to-go for tourist. I guess it’s super famous (at least more than the Holocaust) that some people stood there and took pictures despite the rain was getting heavier, while others just shaded themselves nearby the pillars. 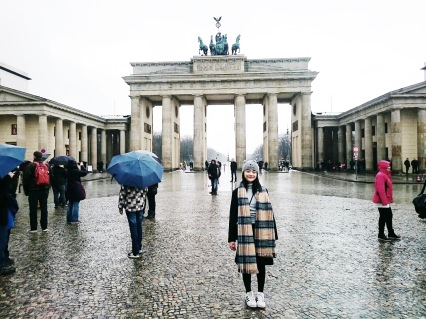 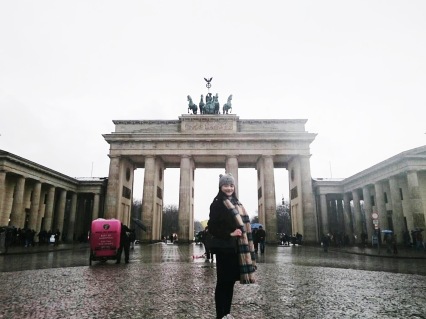 Actually, I planned to wait until all the people gone, but I got two things to consider:
1) my unfortunate friend who patiently stood there (probably thinking why he’s there with me), and
2) my camera lens that unavoidably got wet. 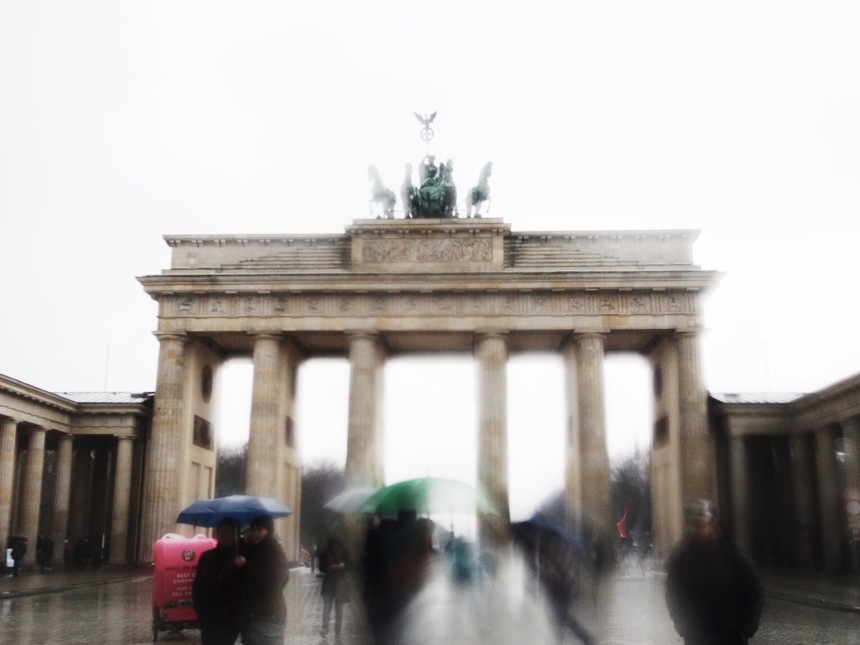 One of the results that I took with my camera at that time. It’s not that I applied any technique or camera filter—it’s simply because of the lens got water on it. Dammmmn, it looks a bit artsy, doesn’t it?

So as I know that I shouldn’t be staying any longer, I said adios to this magnificent gate.

Ok, next stop: The Reichstag Building. 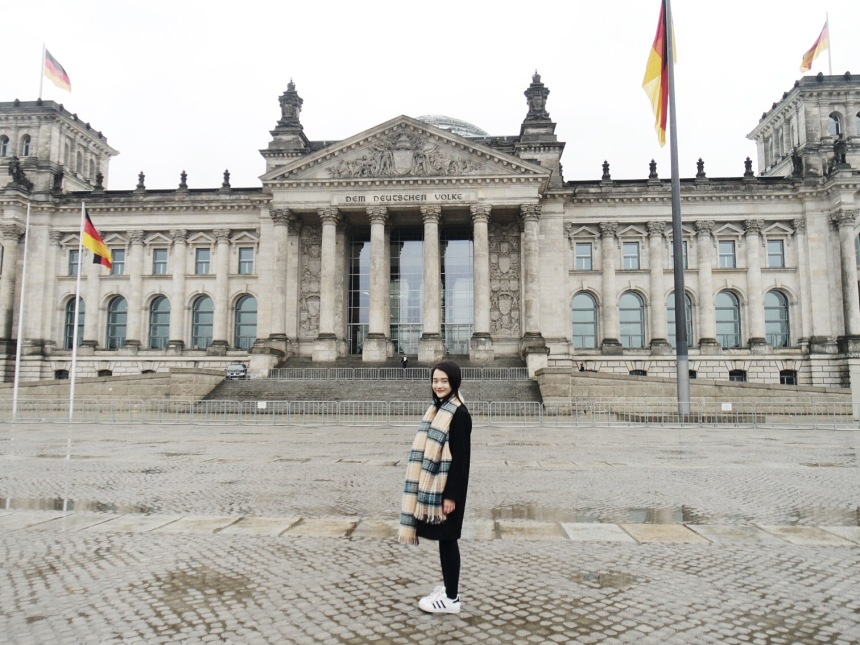 Nothing much that I can say about this building; as a tourist I was there just to take some pictures hahaha (I’m being honest).
And actually it was not raining anymore, but I decided not to take a lot of pictures here because of MY HAIR. Thanks to the rain, my hair was completely ruined. (I did take a close up one tho, but nevermind. Can’t even look at it lol)

By the way, I saw this souvenir store when we were going to the next destination. I still remember my friend’s are-you-serious face when I said  I wanted a picture here, hahaha. I don’t know why but I just love seeing the word ‘Berlin’, especially those under the store’s name. 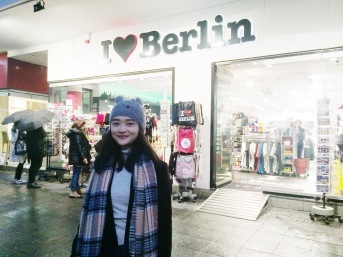 And then we were going to the hip square, Alexanderplatz.
I’m trying to be a Berliner, so I’ll call this place Alex. It’s a famous one with fashion stores and a mall named Alexa, so I wanted to visit this place.
… Only to found out that all shops were closed already (it was just 6 something pm!).
But thank God, there was a market going on at the square, so it was not a waste to go there. 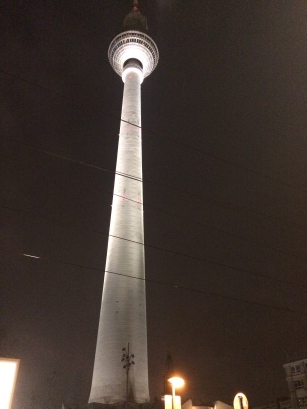 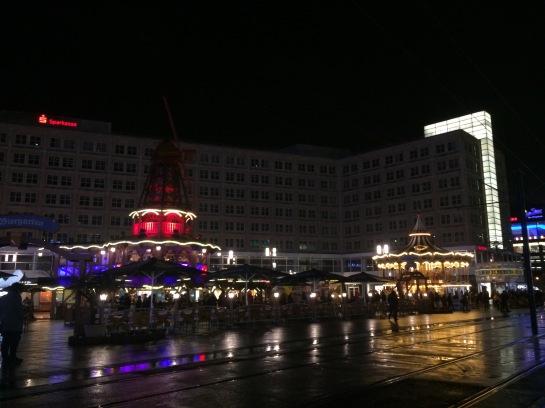 Anddd all my disappointments were gone when I saw the sign of my favourite food in Germany: Currywurst!!! 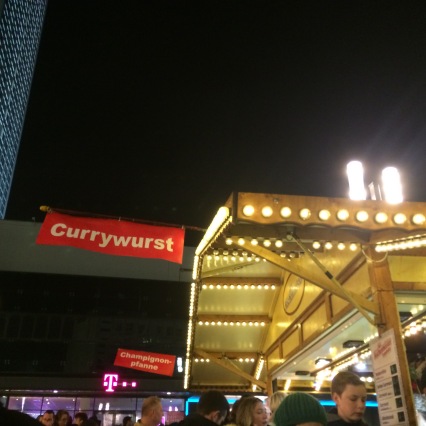 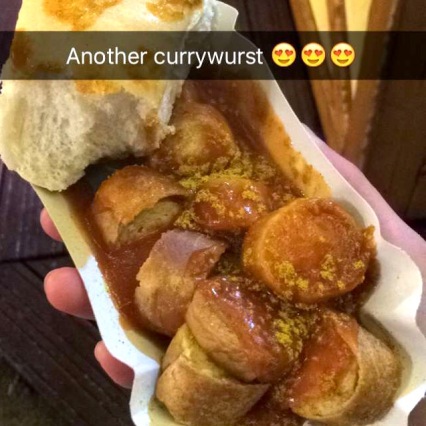 Currywurst contains a bread, sausages, and curry sauce (obviouslyyy). But seriously tho, this food was bomb. Or maybe I was just too hungry after strolling around in a super bad weather.

Sunday morning at The Oh-So-Pretty Berliner Dom.
The next day, as I need to leave at 11am, we decided to go around in the morning. It was around 8am and I couldn’t believe that I was here already.
Moral of the story: early bird gets the worm—I could enjoy the view and be the only tourist in my photo, haha!

ps: right after I took the above picture,  a tour bus came and voila! This beautiful dom was filled by a bunch of tourists.

And then my friend and I planned to visit the Berlin wall as our last stop. I actually didn’t know why, but somehow we ended up in this Berlin wall.

Ok so, apparently there are this Berlin Wall Memorial and the other wall with the graffiti on it (which, the one that I wanted to see). No wonder there were no tourists around here!
This made me a bit sad…… I felt like I didn’t wanna leave Berlin yet.

But yeah, the clock didn’t stop ticking, so we let go of that wall and went to Berlin Hbf.

By the way, the subway train in Berlin is sho cute! It’s so yellow and it has the Brandenburg gates as the wallpaper for the window. 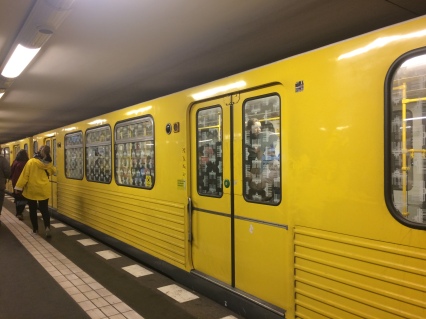 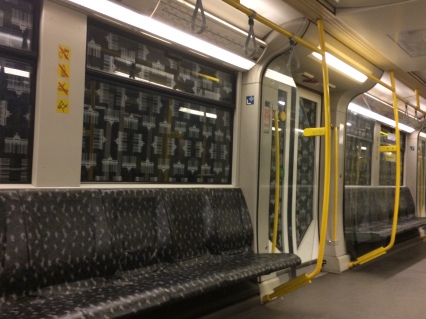 (look at that girl being matchy-matchy with the train! #yellowpower)

And then I was here, in Berlin Hbf (Berlin Central Station).
It says Willkommen in Berlin while actually I was leaving. (btw just wanna let you know that I hate that the Bombardier sign is even bigger… hahaha) 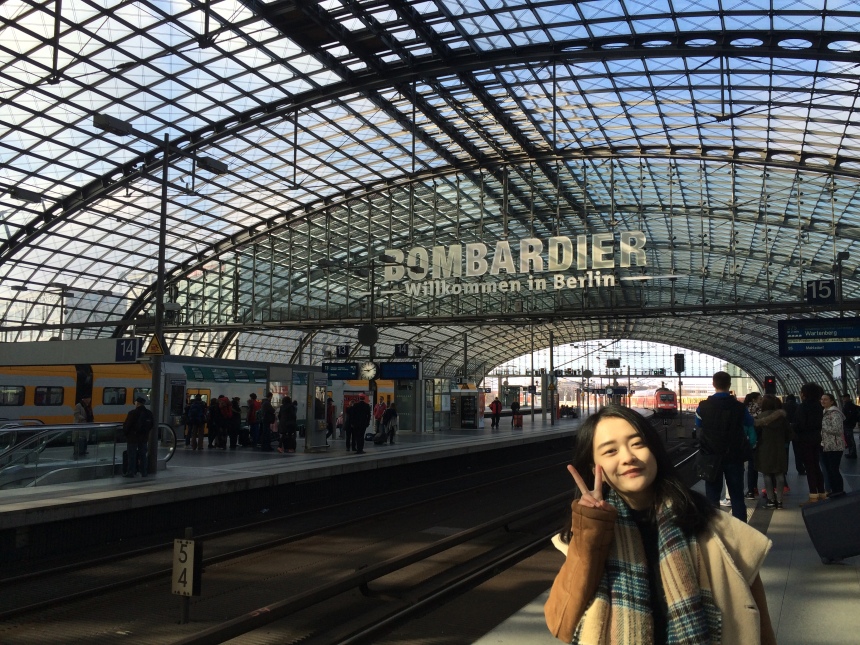 And that’s the end of me being a Berliner! (I mean, tourist. Yea okay.)

Even though Berlin is not my favourite one in Germany, it was still awesome. And I loved being there despite of the limited time I got—that I couldn’t visit all the cool places here, plus the awful weather (fyi it was a perfect sunny day when I was leaving….. seriously, Berlin?).

And of course all credit goes to my friend for being a tour guide who never complained even though I always randomly ask for a picture here and there and that I insisted to stay for a photo when it’s raining. You’re the best, man!

born in 1995.
Hong Kong based. If you like doggos, we could instantly be friends.

Know more about me: