“Sometimes it’s the little thing that can bring you happiness.”

As summer is making its way, I started to notice that some fields are covered by these yellow-something flowers. I’ve always seen them when I was on the train going to another city; thinking, how does it feel to walk along that field?
And since I don’t even know the name of the flower (he he), I googled yellow flower field in Sweden.
Ah, it’s called rapeseed. In Svenska, rapsfält.

It turned out that this is the season for rapsfält to bloom in the whole Skåne. Long story short, last Saturday, my friend Pearlyn and I decided to walk to one of the fields in Lund.
And I’d say that our 30mins walk was just… worth it.

Let me tell you what happens when I was in the middle of this rapsfält.

It was just TOO beautiful that I actually tried to hug them flowers.
HAHA I know I’m weird. But it’s true tho… Even Pearlyn was laughing, probably thinking this girl is crazy.
Okay, I’m serious. It was just like beautifully painted, you know. With the sun that was brightly shining… I bet you’d take a deep breath, spend some time to look around and treat your eyes with such a view. Because that’s what I did.

Random thoughts started to fill my head.
Such as, what is the purpose of my life? How would it feel if I go here with someone special? Will I ever get to see this yellow thing again?
And that the wind keeps on blowing, so it felt just like in a movie. So perfect.

I probably got a romantic-scenes fever, so I tried to copy that scene where the girl runs in an elegant way. And that scene when the guy follows her while she was walking in the middle of the field.

Left: JUST look at how awkward I was when running.
Right: Instead of a charming guy, it was Pearlyn who followed me. Basically what I said was, “Hi (we both laughed), now we’re at the rapeseed field in Lund (awkward pose). Follow me…(Pearlyn laughed) to nowhere.”

Of course I took a selfie here. I mean, some selfies.
Sometimes it’s just hard to open my eyes when I’m facing the sun. And seems like the wind didn’t wanna cooperate with me. Fine. 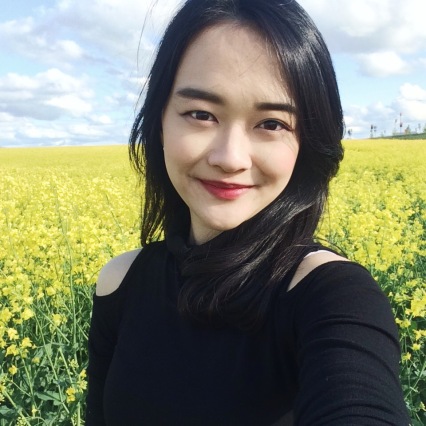 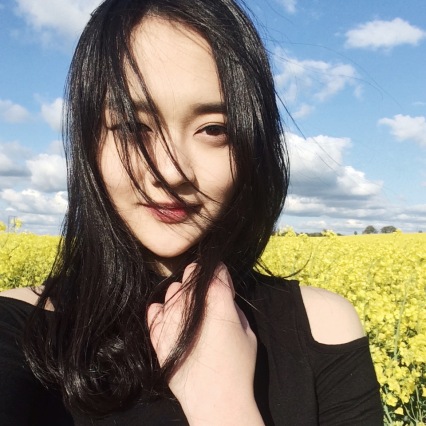 Uh, excuse my shameless selfies. I mean, you’d probably do the same if you were there. Please don’t judge me hahahaha.

When I decided that it’s time to take some nice pictures, I found out that my camera was dead.
The lens just didn’t work. I felt like… Dammit, really? Why now? WHY ME. Just, WHY. So yeah, basically all pictures and video were taken by #iPhoneonly but still #instaworthy. HAHA.
For example, these two photos: 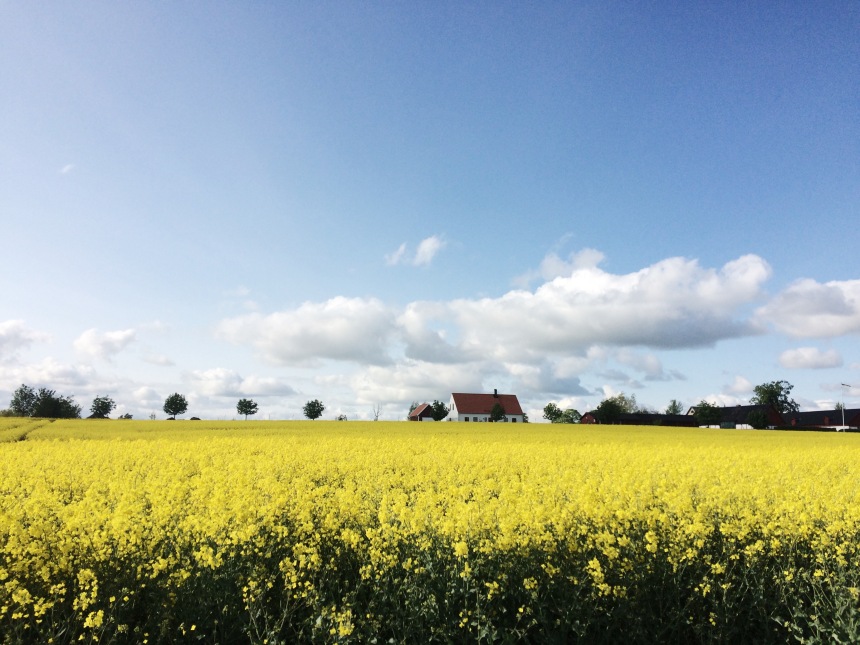 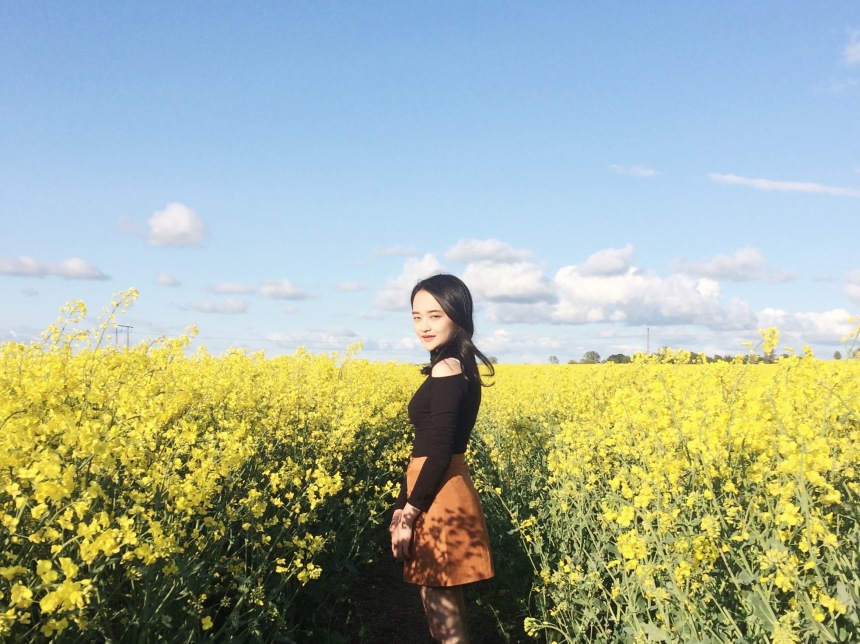 Another little thing to be grateful: there were no people around.
Maybe people here were just used to this Rapsfält… Or maybe they came earlier than us. Or maybe this place was just too big that you won’t have someone photobombing you. How great is that? Hahaha.
Oh actually, a couple stopped by for a while. But they left after taking some pictures… while us, some pictures are just never enough. Hashtag, girls.

And I was just so glad that Pearlyn took some photos of me using her pro camera. Check out how she’s being so talented in taking photos:

By the way, meet Rubi—my little companion since March. 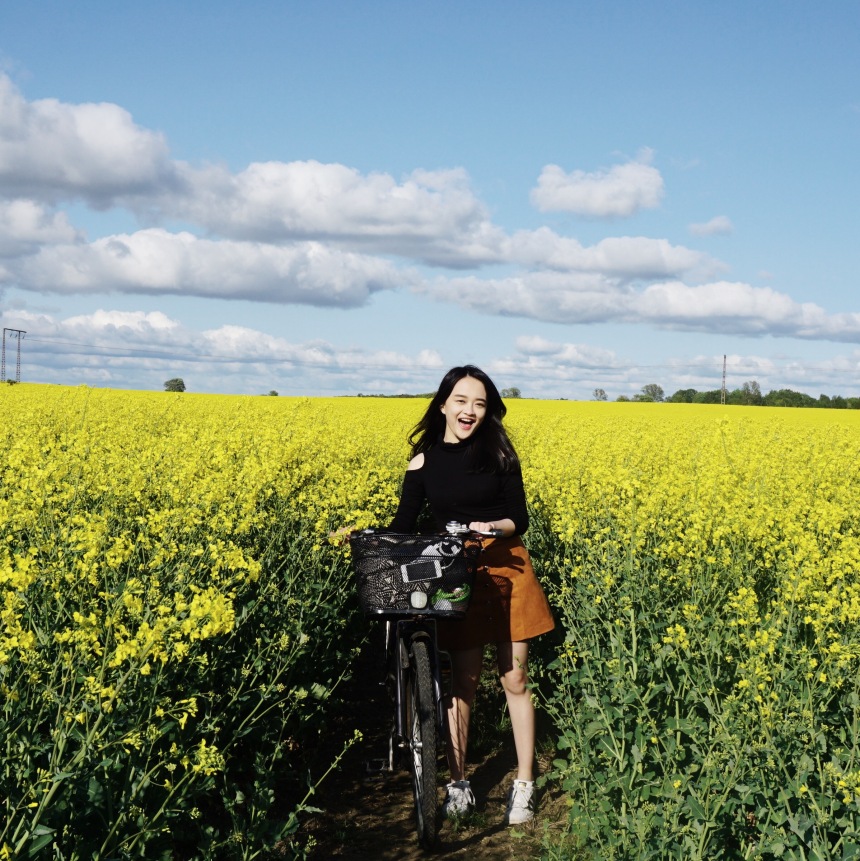 Since we’re the only ones there, we had to use a self-timer to take a photo together. We placed the camera on Rubi’s basket, hoping that Rubi was strong enough to stand still.(Because it did fall down for several times when we were busy taking pictures lol) 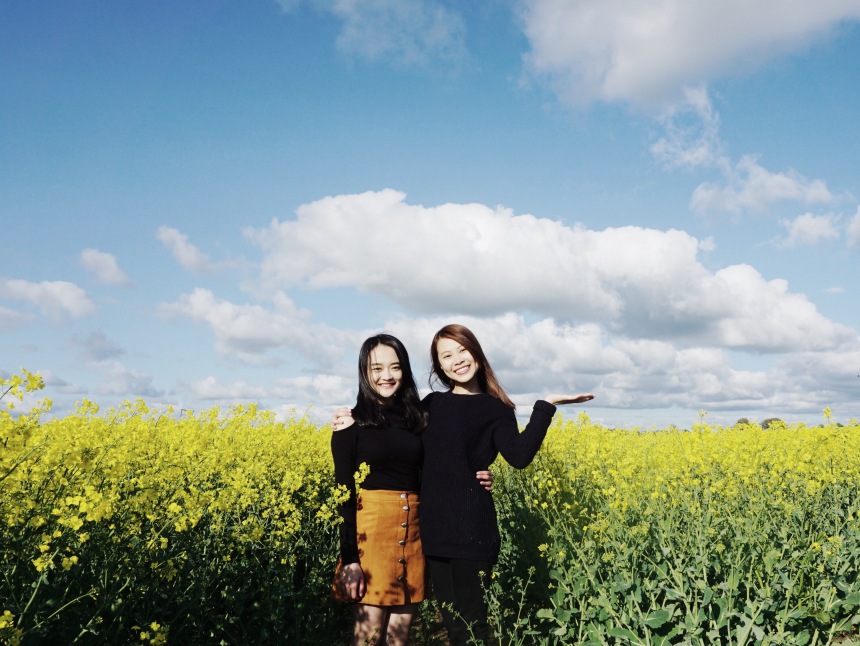 Believe me, it’s not so easy to blow the Dandelion.
Pearlyn and I found something on the Internet that, “if you can blow all the seeds off with one blow, then you are loved with a passionate love“.
OHKAY, I got this. 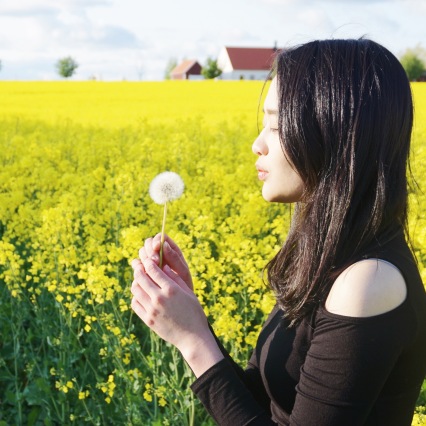 And yeah, I failed.
I mean, how exactly to blow it off at once but your cheeks doesn’t look like a xiao long bao? And how did the girl in some movies make it look so easy? I was even thinking that maybe they have a fan behind them.
Anyway, I was not the only one—Pearlyn failed too, LOL. And even after we googled how to blow Dandelion flower, we still couldn’t do it.
So I gave up. It’s not that I have a lover now, anyway… so nevermind.

Anddd after about an hour or so, we finally decided to go home. I felt like I could stay there forever………. Just kidding! Forever is too much; maybe for a day and have a picnic would be perfect. Or maybe I should just grow my own rapeseed field in front of my house later.

Anyway, it was just another great day in Lund. This little town has never failed to amaze me from one season to another.
And special thanks to Pearlyn for patiently taking silly videos and nice pictures of me. 💛

May you guys find your happiness from the little things around you as well!

4 replies to The Oh-So-Pretty Rapsfält i Lund

born in 1995.
Hong Kong based. If you like doggos, we could instantly be friends.

Know more about me: